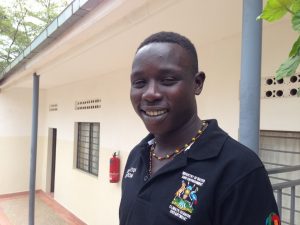 Mwaka Emmanuel is a 25-year-old boy born in Naguru a suburb of Kampala district, He encountered MEETING POINT INTERNATIONAL through His mother (ALOYO SYLVIA) who was a client. He tells his story here below.

I got the opportunity to study with the help of MEETING POINT INTERNATIONAL, I never had a thought that I would make it in my education following the event of 2012 when we had a strike at school (CITY HIGH SCHOOL), I was pointed out as a ringleader for the strike and I was asked by the school to come along with my parent.  I didn’t care so I did not tell my mother.  I stayed in the village looking for what to do, I got a job of loading and offloading sacks of food and one time, I was arrested.  regardless of what  happened, I never lost hope because of the friendship my mother had with Aunt Rose ( MPI Director) I say this because  in 2014, to my greatest surprise, my mother told me that there was a chance for me, Meeting Point International had got a sponsor for me ,I was overjoyed that I asked to join Luigi Giussani High school where I completed my ordinary level and was awarded a certificate which enabled me to join an institute  known as YMCA Comprehensive Institute where I took up  a course  in travel and tourism management because I liked traveling to different places, discovering new things ,this has been my desire since my childhood.

During my studies, one thing that kept me going was the conversation that I had with Aunt Rose; when she asked me why I dropped out in the first place and I told her that it was because of stubbornness, she told me if you desired to ever go back to school there is always a chance for you, for this reason, studying became interesting because Aunt Rose cared for me and now I have finished my course, I am now looking for a job to take care of my family.