I came to Kampala only to be safe from the rebels (LRA) who killed and abducted so many of my village mates in the early 2000s, I was living with my grandmother in the slums of Banda, life was really threatening because she didn’t have work yet we had to survive so I started stone quarrying and later attending a government school where we were asked for little money. But even this little money was a problem to find and I was always chased away from school for not being able to pay it. The problem worsened because that money kept on increasing termly and my grandmother couldn’t afford to pay it anymore so I eventually dropped out school when I was in Primary 5. 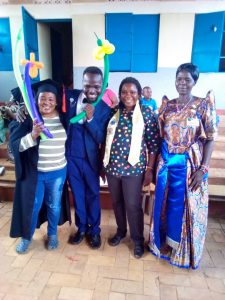 That was the time my parents came to Kampala; this is the period when my mother heard of Meeting Point International (MPI) and started attending the weekly meetings. Later I was enrolled in a project that supported us for three years and that meant I was going to complete primary school; I was very happy that at least I would complete primary though my desire to study didn’t stop. During my vacation after primary school, I crushed stones with the hope of joining secondary level and I even gathered enough money to join one of the affordable secondary schools around (Mbuya college). I started the first term well but in the second term things weren’t easy because I didn’t have the money anymore. My family spoke to the school so that I paid the fees in installments and this happened until I completed senior one. I was the first in my class and the school didn’t want me to leave but it was during this time (2010) that Luigi Giussani High School began. 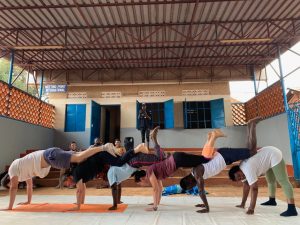 Acro-yoga: Ocaka (second from the right) during acro-yoga sessions every Saturday at MPI Kireka

So I was again enrolled by MPI and this time I got a sponsor called Anna Targa Mietta, she supported me till I completed high school and I joined the Institute of Certified Public Accountant of Uganda where I did ATD (Accountant Technician Diploma), I still didn’t believe I was  going to receive a certificate of education until I  received an email from my school saying I was among those who were going to graduate in March 2019. Without MPI and Anna this wouldn’t be possible, forever I will live to remember MPI and Anna because they did for me something beyond my imagination, I feel am preferred and loved by MPI (Aunt Rose) more than even my own people. I didn’t pay a coin for all these achievements, this is not common in most of the Non-Government Organizations in Uganda, MPI is very special. 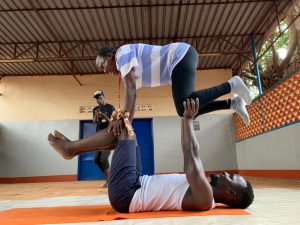 Tina is lifted up by Ocaka during the Acro-yoga sessions.

They treated me as a value and loved me as Ocaka and I feel there is nothing I can do to pay for this love because I feel nothing is enough. Just feel so unworthy, But I will only try to my capacity to be myself. I thank God and Aunt Rose so much for preferring me and pray that He blesses her in her life. She has also given me work in her office and still this lives me with silence in my heart because who am I to now work in an office God. I thank God that made me meet MPI and Rose because they changed the story of life.