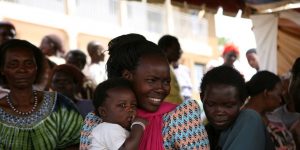 ATIM FLORENCE, a single mother having 4 children because her husband abandoned them. She is a member of Mukisa saving group, she used to sell tomatoes, onions plus other items. She became depressed after her husband had abandoned her with the children; she was then put on drugs. Florence stopped taking drugs for almost a month because she could feel healthy without them. One day, she woke up and started burning her possessions that she almost burnt everything from her house. Always when something happens in the society, people gather to see what is happening. One of the women of MPI saw her and informed the Executive Director of MPI (Rose Busingye) who asked one of the field social worker to take her to the hospital. Florence was hospitalized for one week and during her stay in the hospital, her children were being taken care of by the women of MPI.

On her return from the hospital, she was moved to see that the women took care of her children especially with food, clothing, and scholastic materials such as school uniforms that were being demanded by the school.

The women decided to contribute money from their saving groups and gave Florence to restore her business which has enabled her to continue supporting her family with basic needs. During the weekly meetings with the women and the Executive Director (Rose Busingye), Florence thanked them for their friendship and she said that, “I thought, I had no family but now I realized that MEETING POINT INTERNATIONAL is my Home and I am happy to belong to such a family “from her experience. I realized what Rose Busingye always says, “The greatest need of a human being is the need of belonging”.

For privacy the name was changed. – Written by Jude.