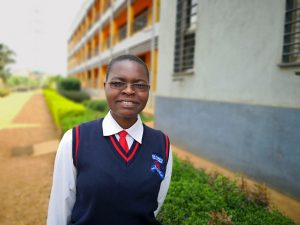 When Gladys came back to Uganda, I caught up with her and she told me her experience being in Rimini, Italy for the first time, for the event “The forces that move history are the same that make man happy”  by Okello Marvin

From the time that I got to understand the movement and the charism of Fr. Giussani through the friends that had encountered him, the one and undying desire of my heart was to reach his grave. I didn’t know when, but certainly I knew I would reach him one day and pour out my heart to him at the foot of his grave.

Hardly had I known that Christ had already prepared everything for me. He looked at my heart and was granting me my desire. Hardly had I known that I was going to go to Italy this year in August. Everything happened when I least expected. Being invited to Rimini Fiera was a sign to me that despite my nothingness. Christ is always choosing and preferring me. Even though I am not worthy of anything as big as this, he has, He has made me worthy by making me now and loving me the way I am. It is something that makes me marvel up to now, at the mysteriousness of God.

Before going to Rimini (Italy), my prayer was that Christ helps me to understand why he has chosen me for the days ahead, and also help me not to lose myself in fear or uncertainty (since I was going completely to a new environment and for the first time) and that he stays with me. Things were a bit difficult at the airports and at certain moments I was so scared. In those moments of getting scared, I could hear the voice of Aunt Rose (Rose Busingye), she had told me once, that I should always pay attention to what is happening at the instant, because the instant you miss everything.

For me this voice was like a waking call to me. And immediately I remembered this I could wake up and look at things around me. And all the things before me communicated one thing to me, “I am with you” Everything that was happening to me was because somebody was making me them and making them for me. So everything I looked at gave me Christ back and this was my certainty because I know that Christ is with me, he is communicating himself to me, He wants me to understand him more.

On arrival to Italy, Teddy and I were taken to the grave of Fr. Giussani. We spent close to 15 minutes and I knelt before Fr. Giussani, I was very emotional that I even failed to say a word. I looked deep into the eyes his eyes, in his portrait. He was looking at me. To me, it seemed as if he was calling me to follow him. I could see and understand whom I am. Because his face looked like that of a beggar, one in need of something. This is what I am, a beggar, who without an “Other” cannot live. I need a “You” in order to live every instant of my life. Fr. Giussani wrote that the real protagonist of history is the beggar, man’s heart that begs for Christ and Christ’s heart that begs for man.

And Fr. Giussani, in his eyes was telling me that I need to be a beggar in order to understand the days that I was to spend at Rimini and thereafter. So I started the days of Rimini with Fr. Giussani’s face in my eyes and heart and Christ with me, so I managed to live those days with a begging and curiosity. How I wish I had the words to describe every moment I was there. It was so beautiful. A beauty, that even now nothing can erase it away.

I met so many people at the tent of AVSI (where I was staying during the day). I met friends that I had been with in Uganda. I also made new friends. Their faces made me feel one with them and at home. They were so free to me and open with me. Through them I realized that I need this simplicity of a child in order to understand everything. Because a child has a simple heart, open, yet curious to know and understand. This is also what I need in order to face myself and everything.

For example, a certain lady came to the tent of AVSI and she had seen me in a video. She immediately began telling me about herself and how the movement helped her to be who she is now. This openness is only possible when one has the simplicity of a child.

I attended the encounter of Fr. Carron on Job. And from Professor Marro’s words and also from the experience of a sick doctor, I think I understand more about human suffering. Fr. Carron explained ways in which man suffers. He said that sometimes man suffers because of his freedom, and that he does something that hurts himself. Then he also said that sometimes man suffers because of things beyond his control, for example natural calamities or even Job who suffers innocently. Fr. Carron was asking, “But why does God keep quiet in front of human suffering? Why doesn’t he intervene?” He answered himself by saying that, if God intervenes, or takes away the suffering of man, He would have taken away the freedom of man. God wants man to face everything freely. Even so no answer is enough to take away human problem. “But does this mean that God has left us?” Says Fr. Carron, “in front of suffering, he offers to us his powerful presence. And this is only possible if we are in a relationship with Him.

Like the “why” of Job was because he was familiar with God. Fr. Carron also said that God didn’t answer the cries of Job (He instead asked Job questions) but he gave his son Jesus Christ as the best answer to the sufferings of man. Only the awareness of his presence enables man to face human problem differently. A poet said that (Imitating Job), “You have given me all possible reasons to leave You but I won’t, I am only asking why?”

All these words were for me. And even as am back to Uganda, I have everything I need to live those days even here. I don’t want to forget anything. Those days are helping me to live now even more certain and in a meaningful way.

I thank God for this friendship, this belonging that he has given me and He is using it to bring me closer to Him. It is here that I want to stay all the days of my life. I won’t let go because he doesn’t let go.