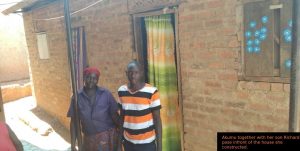 The story of how Akumu Olga built a house by borrowing money from her VSLA group.

Before Olga joined Meeting Point international, she was working at the stone quarry with all her children. The kids were not going to school because their mother Olga didn’t have enough money to pay for their school fees. But when she encountered Rose, all her children were enrolled in schools. Olga herself became a member of Meeting Point International (MPI) where she was able to attend meetings on the various activities carried out like community dialogues, psychosocial activities, sensitizations on food and nutrition, health and hygiene which helped Olga to discover the meaning of life and her value.  Olga’s main economic activity still remained stone quarrying but she was not earning enough. She could not afford to pay for her children’s school fees and pay for their scholastic requirements as well, MPI was doing this for her. To make it worse, her house collapsed at one point due to heavy rains and she lost hope in life. Faced with such a reality, she reflected what she had learnt during the different activities that she was engaged in and she realized that she too could be able to help herself but rather not being helped all the time by someone. She was able to pick up herself by carrying out different activities to earn some money. She worked so hard and constructed a two-roomed house.  She occupies one room with her children and rents the other which helps her to pay scholastic materials. She heads the family and her husband doesn’t live with her or provide any support. He went back to the village. Below, she narrates her story;

One day it rained a lot and my house collapsed but I had nowhere to go, so I just stayed in that house though it was in a very poor condition. My neighbours told me to move out of that house but I could not because I had nowhere to go.  They even called the police, so that I could leave but I still couldn’t leave. I wished it could rain so heavily so that we all die at night because I felt worthless in this world, If God really cared about us then my house would not have collapsed. I could not sleep at night because I had to check on my children. This was because it was a dangerous period whereby they were kidnapping and killing people. The police again came and warned me, I had to move out this time. I decided to go and stay at my sisters’ place and she gave us a single room to stay in for a month. When the month elapsed, she told us to move out of her house because she wanted to rent it out and get some money. I then had no option but to go back to my old house that had collapsed, I used to cry a lot due to the tough situations. We would cook from outside and when it rains, we would sit on a neighbour’s veranda. I had thought of going back to the village because the situation had worsened but my children persuaded me that we should stay because they wanted to study. It was easy for me to get food because I would go to different markets like Nakawa and Banda market and people would have pity on me and give me food, I would also try and collect the leftovers that the market vendors had thrown. 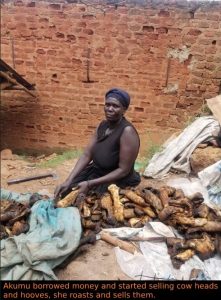 The main problem now was that of money, I had to go to different markets and collect tiny pieces of cassava and maize that were not needed and grind them to make flour and the remaining would be used to make alcohol (marua). It was from this point that I started getting some money because people would come and purchase alcohol. That is the money that I would use to buy food and also save to pay the school requirements of the children. But the money I got from brewing alcohol was not enough so I would go to look for vegetables in different areas like Ntinda, Naalya, Kisasi and many other places, I would save this money in the Village Savings and  Loan Association (VSLA) group of Meeting Point International. I could then borrow money and pay school requirements. As I kept on getting money from the activities like selling vegetables and alcohol, I would return the money that I had borrowed. I again borrowed money and started another activity of selling cow heads and the hooves, I would roast it and sell it to the people in Kitgum, I would deliver it through the bus and a relative in Kitgum would sell it for me and send back the money. This house that I constructed I consider it a gift from God. When they demolished houses from Naguru Barracks, a friend of mine informed me about it and she told me that people were collecting the bricks from there and selling them because they were good, they were used by the British back then in the colonial era. Many women were collecting them and selling them to the wealthy men who came with trucks to buy them but me I knew God had answered my prayers, so I instead collected them to construct a new house. When I had collected many of them, I ran to my VSLA group of Meeting Point International and they lent me 200,000ugshs, I also went to my sister who lent me 300,00ugshs which I used for transporting the bricks at home.

I brewed more alcohol and paid back the loan I got from my VSLA group. I then borrowed more 500,000ugshs from them (VSLA group) I used part of it to collect more bricks and part of it for buying sand. I have a gentleman who is my neighbour, some years back he had requested me for a small piece of land to construct his toilet and I gave it to him without any pay, he again requested for more land to build another toilet, but this time around, he decided to give me 1,000,000ugsh as an appreciation for being kind to him. With that money, I was able to buy two trucks of sand and 13 bags of cement, then I got some boys who were builders to construct the house, I paid them 400,000ugshs. I did not have iron sheets to use, I decided to use the old ones. As the construction was going on, we ran short of building materials, I again had to go back to Naguru to extract more bricks so that I could sell them. I managed to get 600,000ugshs to buy the remaining materials. The iron sheets leak at times but my elder son tried to glue it, it has not helped much but I know that in the future again, I will be able to buy new iron sheets. So that’s how I was able to construct my house, I put in my all and I was disciplined with the money because I had learnt the value of money.

Before my children were being paid for by Meeting Point International, we all used to go with them for stone quarrying, no one was going to school until one day my elder son Robert went to play football and he met Rose, who asked him why he was not at school, he told her that “my mother doesn’t have money to take us to school”, she asked for my name and after Rose took his photo. After a while Rose came to the place where we were doing stone quarrying from and she came with the photo of Robert asking for the mother, I was not around but my friends later informed me that the director of Meeting Point International was looking for me, I had to go and meet her and she told me that Robert would begin school, she also asked for my other children that were not going to school and she enrolled them too. After a while, all my children were going to school. Besides all this, am so happy that because of Meeting Point International, my children are studying, if Rose had not supported them I would count myself useless because I would not have been able to educate them at school. Am confident that my children are having a good foundation because they are studying from Luigi Giussani schools, although in the future they go to study somewhere else, their foundation has been laid firm. Am also happy that through the VSLA initiative at Meeting Point International, It helped me to construct my own house when all hope was lost.  It’s a two roomed house, I rent out one room and the other I live in it with my children. I put in my all and I was disciplined with the money because I had learnt the value of money.