In Uganda generally, the youth prefer to study the advanced level in secondary and then head to the university compared to studying in a vocational institute. Okeny Christopher, after completing senior 4 started doing Agri-business, which is not usual. Christopher tells us his story of this new path he is making; 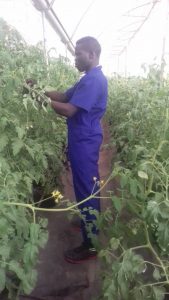 I am Okeny Christopher and I finished my senior 4 in 2017. From when I was a child, I wanted to become a doctor. My sister was working with Dettol (Soap making company), she was supplying different government hospitals. I used to go with her and I could see patients, so I got an interest in becoming a health worker.

After senior 4, I decided to branch to a nursing school in Jinja and at first my parents didn’t agree because my grades were good, so they expected me to continue to the advanced level in Ugandan secondary schools. To reduce the burden of expenses on my father, I did an interview in order to get a government scholarship, prior to that I was sponsored by Reach Out Uganda but the program had ended. After that, since I was a good football player, I had a full bursary under football.

After that, I had succeeded in getting the government scholarship and they had requested for 1 million Ugandan Shillings for requirements. I got this money with the help of two of my uncles and my father. But then my sister was to sit for her final paper before she could graduate, she hadn’t yet paid her tuition then my mother and young sister were sick, so my father had to use that money collected for my requirements. This culminated into me going to school 2 weeks late. I discovered that the school administration had given my place to someone else. One of the instructors who saw me during the Interview told me that I could go and study at Mbale, the newly opened branch but no longer on government scholarship and that was going to cost more than two million shillings so I couldn’t make it. That’s when I started losing hope on that dream to become a doctor.

I began doing small works as I waited for my father to return the money. During the time of election, I met Madam Teddy who was campaigning to become the LC1 in our area. She didn’t win. After the elections, she called us and invited us to go to Rwanda. I could not miss the chance! It was organized by Madam Rose and Teddy, we went to Kibeho were the Virgin Mary appeared to some students in a school. When we came back, I had no plans and hope, the money needed to study was about 3 million. So, I began to do work where I was paid in a range of 10-15 thousand Ugandan shillings. I always sent the money I got to the village to do some farming.

I was doing agriculture in a minor way. In the village we have fertile land so my mother always planted cassava and sweet potatoes, generally food crops and she sold to harvest in Kampala to earn besides making beads and crushing stones. So, I also acquired that skill from her and I also started planting crops in the village through the villagers. I did it for some good time and I was making some money.

Was it hard for you to switch to Agri-business since you had other dreams?

It was not hard for me to switch from my dreams of becoming a doctor to Agri-business. I had already started doing agriculture by sending money for farming to the village. If I fail to become a doctor to treat human beings, through agriculture I can still become a veterinary doctor for animals so I’ve never lost hope. I still have hope even if I had started losing it. So, switching to agribusiness has never been difficult for me. 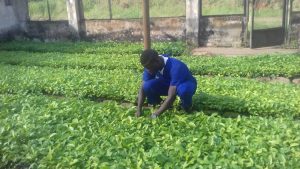 At Agromax, what was your typical day and week?

From Monday to Friday, we followed the programs of Agromax. And in the weekend, we did our own activities. On Monday we had leadership sessions. I was a leader in the field of entertainment. So, I used to give reports of previous weeks on how my department was doing, we had 45 minutes for all the departments to give out the reports. Then we would go to the field, either in the green house or we could harvest. We used to harvest on Mondays and Fridays. Personally, I was given seven green houses to manage including one of; tomatoes, cucumber, sweet paper. Among the workers, I had friends who could help me. Among the students assigned to Agromax, I was the one with the greatest number of green houses to manage, so I had to befriend the workers so that they could help me. We could also spray and give fertilizers to the plants. On Tuesday we could do field work and on Wednesday and Thursday, we would have classes. 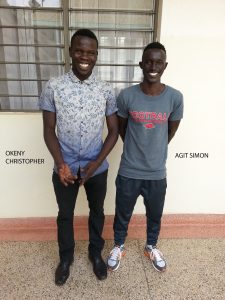 What did you enjoy most during your field attachment at Agromax?

I enjoyed the hands-on practice. Before I used to practice agriculture unknowingly, I could send money to the village for planting crops, during harvesting I could head to the village and then come back and sell the harvests. I used to hate handling a hoe. Now I can do all that, I work in different fields like greenhouses, now I can manage a greenhouse very well. We never only studied about being a good farmer, we also had life skills training as a person in the community. I have met friends, I met senior agronomists, business partners, I’ve met different people who sometimes call me to do for them certain tasks and my network is growing. My life has never remained the same.

How did you end up studying Agri-business?

After the trip to Rwanda, when we came back, we had a call from Aunt Rose and Madam Teddy. They wanted to meet all the youth who had traveled with them to Rwanda, so I took that chance to attend. So, I wanted to go and appreciate what they had done, I hadn’t asked to be taken to Rwanda but they still took us there. Rose had no information about our lives but she loved and cared for us. She wanted to hear from us the changes in our lives after the journey to Rwanda. They were asking us about our plans and goals. When I heard that, in my heart, I was saying, “Thank you God for what you are doing in my life!” Since I failed to get a scholarship from the government for the nursing course, I felt that I needed to do something better outside the bracket of football. I was waiting for her to tell me, “What do you want to be?” I wanted to do catering!

But instead, Teddy recommended us to a special course, Agri-business. She explained more about the course. I looked at my life. I was sending money to the village to plant crops and this was a kind of Agri-business as well. So, this would help me adjust to what I was already doing. I used to read about it, for example having a small garden in the compound and earning from it, so I picked interest. We were many youths and people selected different courses but my friend Agit and I chose the Agri-business course. So, after that I went to Madam Teddy she explained more about the course. We joined COWA vocational institute and thereafter we were sent to Agromax. From then my life has never been the same.

I appreciate my parents, Madam Chrispine of COWA, Mr. Alberto of MPI, my mothers and mentors Rose and Teddy. At the level where I have reached, I can do something of my own even if I am at the initial stages. I would like to thank Meeting Point International!