A Ugandan nurse who founded an organization for impoverished women and children with HIV/AIDS will receive the 2019 Ford Family Notre Dame Award for International Development and Solidarity this month at the University of Notre Dame.

Rose Busingye is president of Meeting Point International, a Kampala-based nongovernmental organization that provides medical care, schooling, and other services that help patients increase their self-sufficiency and develop social networks.

MPI’s mission emphasizes emotional as well as physical healing. In particular, Busingye focuses on helping patients recognize their inherent dignity and worth in a society where they are often shunned because of their medical diagnosis.

“Rose recognizes that she needs to treat the inside as well as the outside of the person,” said Rev. Robert Dowd, CSC, director of the Ford Program in Human Development Studies and Solidarity. “She’s not a heart surgeon, but she helps heal hearts.”

Busingye will receive the award from the Ford Program, part of the Kellogg Institute for International Studies, on Sept. 12 at the Hesburgh Center auditorium. The ceremony will be followed by an armchair discussion with Busingye on “The Value of a Life: AIDS, Outcasts, and the Search for Dignity in Uganda,” hosted by Faculty Fellow Clemens Sedmak, a professor of social ethics at the Keough School of Global Affairs.

Rose, he said, “makes it a point to see a person as someone with something to give to the world. She makes sure that everybody understands that these women are amazing people and so much more than patients suffering from a chronic condition.”

The Ford Family award is given annually in recognition of substantial contributions to human development through research, practice, public service, or philanthropy.

According to Dowd, Busingye embodies the Ford Program’s research and teaching focus on integral human development, a holistic model of human flourishing rooted in Catholic social thought that emphasizes the importance of being connected to others.

“Rose is doing the kind of work that promotes integral human development and those of us seeking to do the same have much to learn from her efforts,” he added. “She accompanies women in ways that free them up and helps them to make the most of their God-given potential.”

Busingye, who is also a midwife, started in MPI in 1993 after meeting HIV-positive women in the slums of Kampala who refused to take antiretroviral medications that could slow the progress of their disease. They believed their lives were meaningless; Busingye sought to convince them otherwise by telling the women they were loved and by creating a de facto family for them within MPI.

She explained on MPI’s website the philosophy behind her work: “The greatest need of a human being is the need of belonging….MPI creates simple environments where each person can find it easier to belong and experience love.”

Dowd noted that many of the women assisted by MPI have experienced emotional or physical abuse, including rape. Some are from northern Uganda and were brutalized by the Lord’s Resistance Army, a guerilla movement that terrorized the region for more than 20 years starting in the mid-1980s.

Many of the women are angry, resentful, and lonely. One of Busingye’s strategies for helping them deal with their emotions is by simply listening to them: “By listening to them, she helps them to recognize that they are valued and that they have value,” he said.

“In giving this award to her, we’re trying to raise the awareness of important work that often goes unrecognized,” Dowd said. “Some of the best work going on in the world is where it’s not being recognized, where there’s not a lot of PR for it, where it’s not being backed by millions of dollars, and we want to highlight that work.”

In addition to helping people reflect on the importance of listening, Dowd added that the Ford Program hopes giving the award to Busingye will spark new questions for future research within the Keough School and its constituent units.

The Ford Family award is named in honor of University Trustee Emeritus Doug Ford ’66 and his wife Kathy, whose generosity helped establish the Ford Program.

The award presentation will be held at 5 p.m. in the Hesburgh Center Auditorium. The event is open to the public and will be followed by a reception.

The new life of Gladys and her father; a lunch with Anifa, a Muslim, in the heart of the slum, the holiday with the university students, from the music of Arnold and Marvin to the fear of the spirits of Ochaka… The four-day story in and around Kampala.
Ignacio Carbajosa

I arrived in Kampala for the Clu holidays in Uganda with three Spanish friends: Juan, Javi, and Paula. On Thursday morning, we went to see the women that nurse Rose Busingye welcomes at the International Meeting Point. As usual, after a couple of hours of dancing, I improvised a small assembly with them. When I met them, I asked them questions that I had at heart, knowing that their experience is rich. This time, in the wake of the Fraternity Exercises, I asked them what nourishes their joy, even today, years after meeting Rose, who welcomed and treated them (they are suffering from AIDS). The first thing that struck us is that Rose continues to be present in their lives just as she was on the first day. They refer, in a simple way, to a paternity that is ever-present. They also share the same awareness that Rose has: that there is One who is making her in every instant.

Then we went to lunch at Gladys’ house, a high-school senior, who participates in the life of the Clu (which includes students from the last two years of high school). Last year, we had also gone to this same house, a two by three meter shack, located in the slum. Glady’s dad was not there last time, but remained so struck by the fact that we had been their guests, that, since then, he has named the humble house “the new Jerusalem”.

Gladys tells us that, since that day, her dad has not been the same, and that many serious problems in his life have disappeared. He works as a guardian at the Luigi Giussani Primary School. At lunch, he told us of his change, of the grace received and of his faith. It was moving, in that humble place, to hear him say: “I don’t miss anything“. We also witnessed a beautiful dialogue between father and daughter: “You still doubt my change, because you think it’s my work”, he says: “But I’m quiet because it’s something that the Lord has done“.

Also at the lunch are Sara, her Muslim friend Anifa and Achiro Grace, who, having finished high school, had a son and, in the last two years, has distanced herself and then been brought back closer, more than once, to the community. But it is clear that she has been marked by what she has met in the movement. Anifa prepared the lunch. It was striking to hear her talk about her meeting with CL as a preference for her life and how cooking for us filled her with joy. It didn’t seem as though she had any problem with the fact that she is Muslim and we are Christians: it is evident that the encounter with us is a treasure for her life.

The next day we left for Hoima, the location of the holiday. We traveled by bus for five hours with about fifty students (among them, two Muslim girls: a university girl and Anifa’s daughter). Once arrived, an introduction was given by Marvin, one of the boys of Kampala. This was followed by some African dancing.

During dinner, I talked to Vicky, who is one of the older students, who will graduate at the end of this year. They are the first to graduate. Until now, I hadn’t heard anyone speak of confusion and fear of finishing university, the fear of losing a certain way of being with friends, the School of Community, the Exercises, the holidays… I tried to help her look at what has happened in her life: “If what you found here is only a nice companionship, then you’re right to fear the future. But if instead, what you have found is of a divine nature, then fear becomes a question to the Mystery of how He will bring everyone’s life to fulfillment”.

In the evening, Mary Claire, Marvin’s sister, presented the film the Miracle of Marcelino. Some had seen it and, impressed, they proposed it to everyone else. The simplicity of the film, Marcelino’s gaze towards everything and the concreteness of his relationship with Jesus, will leave footprints in the following days, also because many of the boys have lost their mothers, just like the film’s protagonist.

On Saturday morning we left for an excursion to Lake Albert. We celebrated mass on a hill overlooking the lake. We ate and then listened to the presentation of the biography of St. Thérèse of Lisieux, which Gladys had read and proposed to everyone. Then, a game together.

Back in Hoima, the evening awaited us, the main “dish” of those days: a trail of songs by very famous contemporary songwriters (Sinéad O’Connor, Pink, James Arthur, Lady Gaga, Passenger and others). Arnold and Marvin are on guitar, sometimes accompanied by Juan and other voices, such as that of Gladys, Prim, Priscilla… The thread that unites the chosen pieces is that of the heart of every man: the cry of meaning, desire, the expectation of something great, the dynamic of preference… A slide is projected for each song, with a short text, and for each one, one of the boys recounts, giving examples from his life, what the song conveys to him. It’s something exceptional.

At the end of the evening, I asked what happened during the show. An experience, I add, cannot be reduced to saying “what a lovely evening” or “how good they were”. It’s not even enough to say that those songs express the nature of our hearts. The evening is an expression of the presence of the risen Christ who, by entering the lives of these children, allows them to understand the dynamics of their hearts, better than the rock stars who wrote those songs. 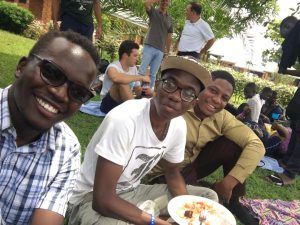 In these days, the thing that filled my mind was the way in which, this summer, we talked about the experience. That is, the possibility, of being able to recognize Christ as a real factor in life. On Sunday, with Rose, I held the assembly. I was particularly struck by what Ochaka recounted. He had accompanied Alberto, the day before the trip, to ask the local tribe for permission for us to stop for lunch and celebrate mass. Last year, there had been problems, because they were asking for money saying that, if we did not pay, the spirits of the mountain would have sought revenge by stoning the intruders. I was struck by how Ochaka realized that the encounter with Christ freed him from fear of the spirits. Even today, it’s not something to be taken for granted in African culture. And not only there.