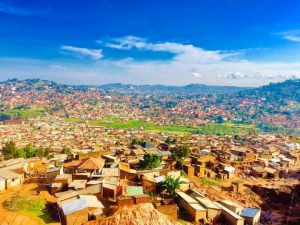 ame is Ateng Beatrice (fake name). I live together with my children, grandchildren and husband in Banda B1 commonly known as Acholi quarters (AQ). My family is made up of 15 members. I have eleven children of my own, some of them are now married and staying in their homes. I make paper beads to earn a living. My husband Okello (fake name) works as a security guard. I come from the northern part of Uganda, particularly Kitgum district. We moved to Kampala in 1991 where we first settled at Kasokoso then later moved to AQ where we are up to now. At that time, AQ was very unhygienic, you could move and find human wastes everywhere. No rich person could want to come here. But then I saw Rose (MPI director) coming to AQ and I wondered why she kept on doing so because she looked beautiful and rich. She would come and take care of the sick people, move up to the stone quarry and help people there as well. I really admired her for this and I kept on asking myself who she is. At that time, life was very hard for me, I had many children to take care of, we were doing stone quarrying with them, they were not going to school and we had no food. I then joined MPI in 2003 and they started to support me. My children started to go to school, I joined beads for life where I was able to make more money, I joined the saving’s group and my standards of living really improved. I was really in awe as to how someone you are not related to and doesn’t know you can love and support you.

In July 2010, as we came back from one of the saving’s meetings meeting at night, we found very many people gathered near my home. There was a baby that had been abandoned. It was covered in mud and other dirt that had dried up and really made the skin hard. The baby looked like it would pass on at any time because it’s breathing was uneven and it really looked very fragile. I figured out that she might be feeling cold since she had been left in the cold for a long. I went home and got a coat that we used for wrapping her up. People had decided to take this baby to the L.C.1 Mr Bongomin but in my mind, I had decided that I would take care of this child. You can only ignore a non-living thing like a tin and other things but you can’t ignore human life because it is of great value. If MPI had helped me and still helping out a lot of people, I could do this for another human being. Although I was poor and didn’t have a lot, my heart was really moved for this child and that it why I wanted to help her. This baby was eventually taken to Mr. Bongomin’s place and he decided that they should take this child to police. I was carrying this baby, I just decided to carry it home, my husband followed me and am glad that he didn’t question me about my decision, he supported me instead. When I reached home, I had to bath the baby, I had to bath her for long because of the mud that was stuck on her skin. At that time, I was breastfeeding my last born so I could breastfeed this child as well. After a while, I had to stop because I was told to first find out the health status of this child. My husband then started supporting me by buying milk for her. From his job, money for milk was being deducted from his monthly salary. When people in my community saw that I was taking care of this child, they started to criticize and abuse me for taking care of her because I already had very many children myself and I wasn’t rich either. I didn’t mind so much about what they said because what mattered is that my heart was moved for this child and God works with a heart that is moved. I knew I wouldn’t lack when it came to the necessities of this child. My elder children loved this child so much that they could do casual work to provide for her anything she wanted. When this child reached two years old, she was then registered to start school with the support of MPI.

After some years, I started to support another child called Bob (fake name) because he was staying a bit far from school (Luigi Giussani Pre-primary and Primary School) and his mother couldn’t really manage to take care of him. Rose asked the women who could take care of this child and I decided to do so. This child has become a part of my family though he is from another tribe. He went back to stay with his mother after some time but he still has a place in my family and he comes to visit us.

I have been able to do these things because I learnt from Rose, she is taking care of a lot of children and she doesn’t even know them. If she is able to do so, then am also able to love and care for other people because we both have the same value. Am glad that I met Rose, MPI because I was loved, and in turn have been able to love others. I have learnt a lot and grown.