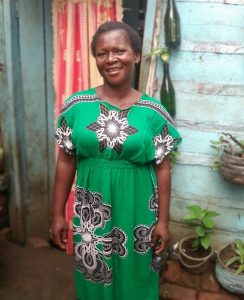 My name is Labol Beatrice, I am 38 years old and I come from Gulu district. I joined Meeting Point International (MPI) in 2014. I am currently staying in Kampala, Naguru with my family. We are about twelve people at home. I am the only one working, I sell fruits like mangoes and guavas. My husband used to work as a security guard but he lost his job and failed to find another. He hasn’t worked in years. Probably because of frustration, he resorted to drinking alcohol. This has now left me with all the responsibilities at home. Life has generally been a struggle for me. With the emergence of COVID-19, it came about with its complications which toughened everything. Since I am the only person working, I have been taking care of all necessities in the house like paying rent, school requirements, medical bills, buying food, and many other things. All these responsibilities became so hard and I felt a lot of pressure. To make everything worse, the coronavirus came in and there was a lockdown that was imposed in the country. It became hard to do my activities. When it was imposed, I only had Ugsh 40,000. I was seeing other people doing a lot of shopping so as they can have some food in their houses but I didn’t have enough money to stock food as well. With the little money that I had, I bought 2 kgs of maize flour and a kilogram of beans. I knew that we were going to go some days without food but I would at least be able to make some porridge for my children with the flour I bought. I was worried about how we were going to face this whole period of lockdown. But good enough, people that sell food items like me and many others were allowed to work. Big trucks that transport food, were also allowed to operate. I saw some hope in this. I would walk from my home in Naguru to Kampala center every morning to purchase mangoes and other fruits to sell. I would put them on a motorcycle (Bodaboda) then I would foot back to Naguru. I couldn’t board any car because public transport was not allowed to operate, however, motorcycles were allowed to deliver food and other necessities. My business was very slow because many people were not working and also the strict restrictions put in place limited people from walking. This meant that I had very few customers and hence I was getting little money. I was earning little and yet I had very many responsibilities. All the children were now home and I had to feed them. At least when schools were open, they could eat from there. I was also behind rent dues with very many months. The landlord was not happy with me and so he decided to chase me out of the house. He wanted to throw me out immediately but I pleaded with him to give me some more time, he took this issue to the local chairperson of our village. The chairperson managed to convince him to at least give me two weeks so as I could get where to stay. In these two weeks, I was very stressed and uncertain of where next I would go. But salvation came to me in different forms, one; is that one of the women in the community understood my situation and decided to rent me a small piece of land at a small fee, she gave me enough time to pay her the rent fee. Where I was chased from, I was paying Ugsh 250,000 monthly but in this new place, I am paying Ugsh 75,000 monthly. I decided to construct a one-roomed house with wood so as at least we could have where to stay. The other form of salvation is that I wasn’t alone in this moment, some women from MPI like Adong Christine (Akongo Margret) helped me. They provided me with money and other things that I needed. I was also counseled, even when I was chased and didn’t have where to stay, I was happy” When all hope was lost, I had people around me who took care of me. In fact, I wanted to go back to the village because I couldn’t handle the situation here in Kampala. But Rose and other women encouraged me not to go to the village and they were there for me. Without this company, I could have given up and gone back to the village where life is probably simpler than here in Kampala. With the people around me who helped me, I became less stressed, I became free!

I want to tell everyone that they shouldn’t lose hope in whatever situation they are facing. The darker times always come to pass; you shouldn’t reduce yourself to what you are facing now because there is always hope for a brighter future. What I have learned from being a member of MPI is that togetherness is very important. You shouldn’t despise anyone or refuse to associate yourself with people. These are the people who will always help you even when you have a problem like I was helped. You should also always learn how to help out a friend in need because however bad someone is; they have a value!