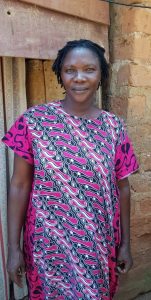 Akongo Margret, a 47-year-old mother lives with her family of 10 members in Naguru, a slum in Kampala. She stays with her husband, 3 biological children, and other children she is currently looking after while others are no longer under her care because their lives became better with Margret’s support. Margret grew up as a paternal orphan. Her mother did not attain any education and when she lost her husband, she decided to move to Kampala with her children because there was insecurity in the northern part of Uganda where they originally come from. Living with a single mother who did not have a formal job was not easy. People around used to consider them to be the most vulnerable family which led to their discrimination and stigmatization. Margret’s mother used to collect firewood from people’s fences in a place called Kololo and sell them to earn income while she picked wild green vegetables that she used to feed her family. Some well-wishers would give them food once in a while. When Margret got married, she used to spend most of her time alone because she felt that she cannot fit anywhere in society because of how vulnerable she was and also because of how her family was treated while growing up. She had no confidence to speak freely and rejected invitations to gatherings because she felt unworthy to be among people. Her elder sister who had been a member of Meeting Point International (MPI) died due to complications from HIV/AIDS and that is when Margret got courage to join the MPI family whose invites she had been ignoring for long because of her fears of rejection. She managed to meet with the MPI director Rose Busingye who educated her about the value and dignity of a person which is greater than sickness, poverty, riches, one’s level of education, and many other worldly things. “I was embraced by this community in a way that I felt desired yet they did not know me. I had not experienced this kind of love and so this was the beginning of my self-discovery into my value which opened up my heart and mind to the world” Margret contemplated. She used to reduce herself by the circumstances she was facing but after getting this education, she discovered that the human value and life are very precious. This guided her into looking at everyone as having the same value as herself and she started to associate more freely and embrace people in her everyday life. “Before this education from MPI, I never knew that I could make a great change in another person’s life even with the little I have. I always feel so much pain in my heart whenever I see another suffering and I wish to take their pain away.”– Margret. Discovering her value more every day widens her knowledge because she looks at everything with a gaze that is why she is giving a helping hand to the people in her community. “The way our sponsors care for us without knowing us makes me pose a question in her mind, “Who Am I?” – Margret.

She gave a recent scenario from where she is operating her small business of selling fruits with one MPI member called Beatrice. Beatrice kept running short of capital and Margret encouraged that they combine funds and buy a large box of mangoes, sell them and share the profit which they did. They started this journey in November 2020 and their business is operating well in that they are able to buy food for their children, save with the MPI savings groups, and keep little for an emergency without encroaching into their capital. Other friends who sell close to them borrowed the idea but it was not working and one of them asked Margret why theirs was a success. “They borrowed this idea from me without first knowing who they are and why they are doing it so I encouraged them to look closely at everything not for personal benefit but for the need to journey together” – Margret. In her community people are united in that when anyone is sick, you find members of MPI visiting while others manage your business till you are fit to resume.

“Margret picked me up when I felt that I was between a rock and a hard wall with no relative or family to help me and nowhere to sleep after being thrown out by the landlord. My family had rejected me and my children but Margret gave me the remaining small land beside her house and now I have a place to sleep. I am also selling mangoes to help look after my family. The MPI family is always holding my hand which gives me strength. I am now aware of my value and one of others since I have been shown a better way of living” said Akwiri Alice

In the photo above is Akongo Margret (left) and Akwiri Alice (right) standing in front of the small structure they set up for Alice. Besides it on the extreme right is Margret’s house.

Margret insists that the best way to live is by holding the other person’s hand and move together without leaving anyone behind because she believes that whoever she encounters is sent to her by God. Margret ended by saying how blessed she is to have met the MPI family because before their intervention into her life, she was always sad and worried. She thought that her children would not study beyond Primary Seven since she is not educated and was struggling to look after the family single-handedly. However, one child completed university and two are in secondary school all because she was embraced and her only wish is for all to live in this way.