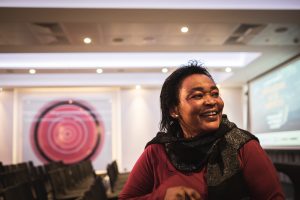 Rose Busingye is the founder and director of Meeting Point International (MPI). She was born on the 31st of December, 1968 in Kampala, Uganda. She relocated to Kitgum in the north of the country as a teenager, an area that later became a centre for guerilla activity when rebellion by the Lord Resisitance Armu (LRA) broke out in 1986. She experienced  the horrors of war first-hand during a period when so many wounded people died from lack of assistance. It was from that experience that her decision to return to Kampala and enroll into the school of nursing at Nsambya Hospital was born. She graduated as a nurse and midwife in 1990.

In July 1990,  she obtained a Scholarship to study at the Hospital of Varese, north of Milan in Italy, where she specialized in infectious diseases, heart surgery and maternity care until September 1992.

On return to Uganda in 1992 she began working with HIV/AIDS patients and became skilled at counselling terminally ill people with HIV/AIDS.

In June 2003 she founded Meeting Point International.
Rose Busingye has participated as a speaker at numerous international meetings and conferences below on the topic of HIV/AIDS Care:

2001 – Press Conference “Cor Unum” project – Rome (Rose speech to Pope JPII Lent).
2002 – Participation in the National AIDS Day, Kampala;
2003 – Awarded the ‘Servitor Pacis’ prize by the “Path to Peace” Foundation presided by the Permanent Delegation of the Holy See at the United Nations;
2005 – Conference at the Meeting for Friendship among Peoples, Rimini (Italy);
2006 – Intervention at the presentation of the encyclical letter by His Holiness Benedict XVI “Deus Caritas Est”;
2008 – Hollywood Film Director Spike Lee was the winner of the Babelgum Documentary Award, in the first Babelgum Online Film Festival for the documentary “Greater: Defeating AIDS” in Cannes. This film depicts the work of Rose Busingye and Meeting Point International towards the defeat of AIDS in the Naguru and Kireka slums of Kampala, Uganda.

2008 – The President of the Manhattan Borough of the City of New York (NY) declares May 14th, 2008 the “Women of Meeting Point International of Uganda Appreciation Day”;
2009 – Participation at the Synod of African Bishops on Justice, Peace and Reconciliation; Rome (Vatican City).
2012 – Speaker at the 50th  International Eucharistic Conference, Dublin (Rose’s testimony International Eucaristich Congress); Conference in Carpi (Italy)

2013 – Speaker at a Conference in Verona (Italy) about the important work the Verona Fathers of the Comboni missionaries have done in Uganda.

2019 – Awarded the “Ford Family Notre Dame Award for International Development and Solidarity” at the University of Notre Dame in the United States.