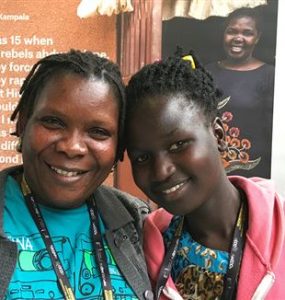 An AVSI booth at the forum on the most important cooperation in Europe and a table where to build necklaces. So two women from the slum of Kireka have “woven international relations” with the story of their lives. And showing what is dignity.

” What a powerful energy “: perhaps this is the most frequent comment expressed by those who met in Brussels in recent days Teddy Bongomin and Sharon Akidi , respectively 45 and 20 years, two of the women of the Meeting Point International of Kampala , which on 5 and 6 June were hosted by the European Development Days, the forum for the most important cooperation in Europe , this year dedicated to women empowerment , the defense and promotion of women.

AVSI and MPI have won together the selection to have available a stand where they can tell the participants (experts, analysts, think tanks, officials, heads of state including princesses and queens) in what kind of development aid they believe and it is worth investing more resources. Especially when it comes to women.

And the proposal made to the EU has routed the competition: focusing the stand on the experience of the MPI, the Ugandan reality initiated by Rose Busingye , and then to invite two witnesses of the multi-sectoral program that with the support of AvsI is here proposed to thousands of women that as vulnerable, as they are defined in cooperation, they become protagonists of their life.

It is difficult to describe in writing the attractive force of the lady and girl of the slum Kireka (for Sharon was the first trip ever made by air): wonder, restlessness, perhaps even envy for their freedom they painted on the faces of those who listened to them or were close to them to make a colorful necklace. At the stand there was in fact a sort of small workshop with everything necessary to offer those who wished to learn how to build their own jewelry. Paper pearls (otherwise doubly appreciated by the environmentalist context because they are environmentally sustainable) have been snapped up.

For days, Teddy and Sharon made themselves available to anyone who interviewed them. They answered questions of all kinds, retracing their personal story from the beginning, with patience, as if every time it was the first, with special attention to anyone who faced, from the top official to the volunteer on duty . And while they were talking in such disarmed ways, without realizing it, they were weaving networks of international relations and conveying a precise idea of ​​what empower means , to value-emancipate a woman.

They started from the description of the situation of fragility they were in: for Teddy the illness, the beatings of the husband, the abandonment by the relatives, the loss of his house and his property; for Sharon, she escaped from her village as a child because of the war, the life of being displaced, without food, care and clothes. Until the meeting for both with those who accompanied them to a change of pace, through health care, education, savings groups, the start of business activities … At the heart of the testimony is always the same pillar: clear communication that to have really freed them was the self-consciousness, or the recognition of their value . « Now I am free, now I am free », they repeated, but of a freedom generated by the discovery of being loved and of their own value contained in their own breath, in the pure, essential fact of being in the world. What then the money is missing, that make sure to arrive at the end of the month, that Teddy’s daughter must resist every day the pressure of those who say that for a woman is easy to make money, just sell … All this does not move a millimeter from their certainty.

The two women at the Lgbt stand

“If I find out who I am and I stand firm in my dignity ( nobody pronounces dignity in Brussels with Teddy’s granitic tone, devoid of any rhetoric, ed ), he does not define the poverty or violence that I can suffer. My value is irreducible and therefore I can stand in front of everything. Problems do not disappear, but take on real dimensions, which can be tackled ».

The two dragonflies of Kampala are curious, and they are curious too. Nothing that moved in the exhibition space at the “Tour & taxis” center escaped their radar. A nearby booth was run by an LGBT rights defense association. A solitary young man of about thirty was presiding over him, and he did not receive many visits. Teddy watched him sideways, until he could no longer resist and one evening approached him, with Sharon in the ribs. She stayed with him for a long time, did not seem to want to give up: “I wanted to understand what he is looking for, how he is . For us Africans it is a very distant subject. I have listened to him, I have tried to grasp his need, I have not told him anything, except that he must know that he is worth “.

After 48 hours spent in the great cooperation fair, going through the corridors with Sharon meant stopping every two steps: she greeted everyone and had to exchange something with everyone, as if she were the hostess, with her Ugandan dress and her shoes gym.

The stand was designed to show a way to do development cooperation that, in respect of all the rules and trends that the EU imposes, one of the greatest donors in the world, knows how to get to the real needs of people and from those to start a recovery, trigger a process that allows each person in each context to recover life in hand and play it in full, in its community. Teddy and Sharon transmitted it by osmosis, overcoming the filters of the bureaucracies and pro forma that often envelop these worlds. It is not difficult to think that they have infected more than someone with their way of looking at reality.

Published by Communion and Liberation