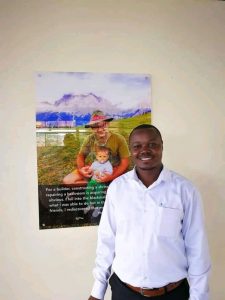 My name is Mr. Wandera Joseph, 38 years old, a teacher at Luigi Giussani High School (LGHS) and I teach Christian Religious Education (CRE) and History. Am also in charge of training the choir. I joined LGHS in 2013 and became the deputy headteacher officially in 2015.

When the lockdown was imposed for twenty-one days, we thought that after those days, things would go back to normal but it didn’t happen that way. The lockdown was indefinite and we didn’t know when schools would open, we had no hope at all. Most of us teachers were at home and didn’t really have anything to do in line with our jobs. I was at home with my children, I would do a number of activities with them but I felt that something was missing. I was missing my colleagues and also the work. When the HTC (Head Teacher’s Council) was suggested and it first convened through google meet, I was very happy, it brought back life and hope. First of all, this meeting was for us (adults) because ‘you can’t give what you don’t have’ and later for the students who join us all together. It was from these meetings that we decided to give work or self-study materials to the students and also visit them at their homes. Since the lockdown had affected us, we also imagined how our students were doing. We had to keep in mind our relationship with them. We decided to engage the teachers first, to begin with preparing work for the students. It would be dangerous for us to leave them ‘alone’ at home. The students received the work but later got tired of it. Their daily lives were not involving academics; they were facing a number of issues as human beings. We were interested in their humanity than anything else. If a human being is ok, then they are able to face anything. The human being requires another. Before the lockdown, we had a relationship with our students where they would reveal to us the challenges they were facing in life. Since the lockdown was put in place, we didn’t know how they were doing and if they had anyone to talk to. It was then that we decided that the work was not enough, we then went to their homes. They were asking us when they were going back to school, we didn’t have an answer for them, but we told them that the fact that we were at their homes and providing them work as well, we were thinking of them.

One of the places we went to was the welcoming house where we have a lot of our students. We had a session of dancing and singing with them. They easily express themselves in this way, it was a nice moment that we realized they liked as well. Seve (Educational Advisor at LGHS) continued to journey with them through different activities. He later gave me a letter that the children wrote inviting me to sing with them. We arranged and I started to go there for a number of reasons i.e. I like music, all the children were in the same place so it was easy to organize, their parent was willing to accept me into the home, most of the things I learned in music was free and most importantly, I was moved with how the children were expressing themselves, I wanted to do something for them given my knowledge in music. Being there was also for my own good because I was always happy, it was an opportunity for me to keep on discovering myself. I have an opportunity to interact with children at school and my home. A relationship with a child helps me to be appreciative to God because I was once their age and He has taken care of me through all these stages. He is looking over me and He takes me as a precious person. If you are by yourself, it’s hard for you to discover some things but in a relationship with another, you discover a lot. We had the Christmas carols with the children at the welcoming house, they were of different ages but for me, it was the humanity before me. It was an opportunity to live the moments of the nativity through the songs. After the carols, we were all happy and I kept on checking on them through phone calls. Some days I would go there and we would do a number of activities like playing, singing and I was even teaching some of them how to play the keyboard.

COVID-19 had its negative effects like confusion in the education system but for me, it was an opportunity to stop and think, to ask myself what life is, and to reflect. To discover the important things in life and not take them for granted. For me, one of the ways I discovered this was through the children.