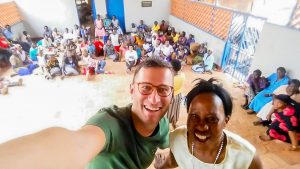 Nicola, a visitor “from the sky”

My name is Francesca; I am doing volunteer services in Kampala working for AVSI in the DSP project. Two days a week, I work in Meeting Point International for the DSP office and I have the occasion of living the gaze that Rose and the social worker have on the children. Some friends, who are MPI donors, visited me for Christmas and they have the chance to visit the Luigi Giussani Schools and to meet the children and the women of Rose.

Two of them were going back to Italy after one week with Rose and the women, they are both teachers and were very moved with what they saw. They were sharing what astonished them on their way back to Italy. Surprisingly the flying attendant, who is an Italian man working for Emirates called Nicola, interrupted their conversation. He asked them where they have been. The two friends were so involved in their conversation that pretended not to hear the question of Nicola. But he insisted on asking them. Why was he insisting and why did the conversation of these two people attract him? At that moment, they told him that they went to visit the daughter of one of the two and some friends. He couldn’t give up and asked: “do you belong to the movement of Communion and Liberation?” Why did he ask this question?  The question made them keep quiet and they were asking themselves, within their hearts, “How did he discover what we belong to”? The friends were speechless because they could not realize how he did notice it.

At that moment, a dialogue started and a friendship starts to link them.  Nicola met the movement years before; he left it and moved to Dubai because he was attracted by the life of the big city. He shouted up every question about God because the intensity of Dubai’s life convinced him that everything he had was enough. But he remembered that years before he heard about Luigi Giussani School and when his job drove him to Kampala he thought to visit them. But he didn’t.

So, on the way back to Dubai (the flight was from Kampala to Dubai) he got interested in the attitude of the two friends. The way those people were talking enquire him about his desires to visit the Schools and he decided to ask. He was moved by the two friends because they witness the beauty they saw. Since the day before Nicola was careless about “what was missing” in his life, but since that very moment, he starts to see the beauty the women were talking about.

He came to Kampala and visit Luigi Giussani Schools and the women of Rose. He was surprised by the intensity of life of these people. Apparently, they were missing many things, but they are aware of what really matters. Rose said, “try to answer the question – who am I? – who are you Agnes, Ronaldo, Bishop, Nicola?”. Nicola did not know what to answer. The woman replied “Who I am? I am someone who someone else is doing. I am not making myself now. I have been created and at that very moment, someone is with me. This relationship is giving me value and gives value to everyone and every feature of reality that I face. Answering to the provocations of reality I can live and discover this value. If I discover who I am I become intelligent and I learn how to relate to reality. Discovering who you mean that everything that you do gain a value”. Nicola realized that the women were not giving the “right answer” but were describing their life. They were talking about the meaning that they experience every moment of their life.

For the fact that Nicola was there, everyone wanted to know him: children, women, the guys of School of Community wanted to know who he was. He said that he had never experienced people who were so freely interested in him. “It is so uncommon that people who are truly curious to discover who you are. These women are capable of loving everyone and everything because they know that they are loved. Even if many of them lost everything they have gained what allow them to love and to truly possess everything”.